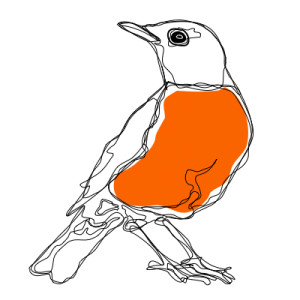 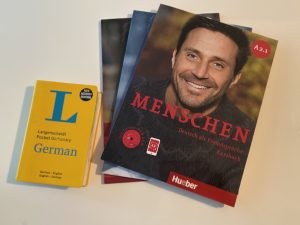 From the Beginning …Again!

My fiancée and I were 2/3 of the way into our first German course at the Goethe Institut when everything came to a standstill. Our class was large and although our instructor did an admirable job of recreating the experience online, the pandemic version of our class just wasn’t the same.

I’d tried learning German on a couple of occasions in my youth however neither experience had ended well. I think I got a 51% in Grade 11 and when I took another run at it in university I dropped German before it would show up on my transcript. Trying to learn another language while adapting to living on my own and coping with a full course-load was just too much.

However, as a die-hard Berlinophile I felt it necessary to give it another shot.

When the Institut announced the second course, A1.2, would be held entirely online starting in early April, I threw any online learning reservations to the wind and jumped at the chance to continue my education. With no work for the foreseeable future I could luxuriate in the experience. When would I ever have another chance like this to learn without interruption?

For 10 glorious weeks I had class for 2 ½ hours each Monday and Wednesday. On Fridays, even though I really couldn’t afford it, I paid for private tutoring sessions.

However I soon came to realize I couldn’t afford not to do it: German gave structure to my week and helped to keep me sane. For the first time in my LIFE I did homework, consistently. I even made up my own hausaufgaben.

I relished my new instructor’s Hamburg lilt and loved trying to squish my mouth around those same sounds. I loved (and hated!) trying to say things in the “right” order while keeping in mind all the different tenses and myriad conjugations.

I’m a word guy and my previous travels as well as my interest in German history, film and music informed my vocabulary. I liked making connections.

Although I loathed all the fill-in-the-blank exercises and crosswords (they’re just so rigid and uncreative) I did them just the same. And then somewhere in the process something amazing happened: I let go of my ego and started having fun. Like actually having fun learning. If only my grade 11 self could see me now!

The Dreaded: If This Then That

As a former arts student (I have my B.A. in Creative Writing) and publisher I spent my lifetime avoiding the black and white, “if this then that,” empirical world of science. “Where was the magic,” I wondered, “in absolutes?” I had a hard time with basic mathematics in high school and battled grade 11 Physics three times before finally passing it.

Going back to school in 2013 for Massage Therapy was intimidating. More than half the testing was multiple choice and the practical tests were pure mechanical memorization; two of this technique followed by two of something else to prove I can do I can do both safely and without harming my patient. School was a boot camp that only served to prepare you for the trial of board exams.

The only way for me to truly understand what I was learning was to find “the art” inherent in the material. Learning muscle insertion points and bony landmarks was rote and boring but the etymology of muscles and bones was fascinating!

The coracoid process, for instance, is the hooked part of the shoulder blade that lies on front of the body and serves as the insertion point for pectoralis minor, the short head of the biceps and the coracobrachialis muscle. Its name comes from the Greek word meaning “raven’s beak,” which is exactly what it looks like. Interesting right?

My ego was really fragile in those days. I seldom raised my hand to ask questions during lectures. Instead I’d pray a classmate would have the same thought and ask on my behalf. After a class I might stay behind and query something in private or more likely I’d ask one of my more trusted colleagues for clarification. I was afraid of outing myself as an imposter. Of course I realize now how ridiculous this was. But, as school wore on I became increasingly comfortable with the idea of never having all the answers – and that, I think, was a valuable lesson. After all, if we knew everything we’d have nothing to strive for.

Learning the “language” of anatomy helped me better understand both local and systemic conditions. Learning how you learn, I discovered, was just as important as learning what you’re learning.

These days I study German for the pure pleasure of learning. It keeps my brain from going numb and it heightens my appreciation for the films I watch and some of the Instagram accounts I follow. It makes me smile and it gives me so much joy.

Miriam, my teacher, and my classmates have fantastic laughs and in class I’ve transformed from shrinking violet to occasional trickster. A couple of weeks ago Miriam taught us how to use the word weil (because). When using weil you are linking two connected thoughts, one before weil and one after – i.e., the dreaded if this then that.

Miriam had literally just explained this concept when she threw us into the deep end. In her version of trial by fire she unveiled a raft of half-finished sentences and asked us to fill in the blanks. My mind raced as I read the first one.

I don’t smoke because.

My classmates and I sat in stunned silence for an uncomfortable moment before I thought, “what the hell,” and decided to give it a try. As I started talking I realized I had no idea where I was going with my sentence and then it just flopped out of my mouth…

I don’t smoke because I don’t have a lighter.

Everyone shrieked with laughter including Miriam who half-scolded me for not saying something more along the lines of:

I don’t smoke because it is not healthy.

But then, because she is an excellent teacher, she rewarded me with some positive feedback. “But what you said was totally right.” And that felt so good.